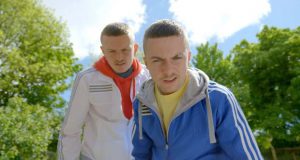 The Young Offenders is an Irish television sitcom, based on the award-winning film of the same name, written and developed by Peter Foott. The series follows the lives of two loveable rogue teenagers Conor MacSweeney and Jock O’Keeffe and became an instant hit when in aired on RTE 2 and BBC 3 in early 2018. Seasons 2 & 3 and a Christmas special have now been commissioned by the BBC.